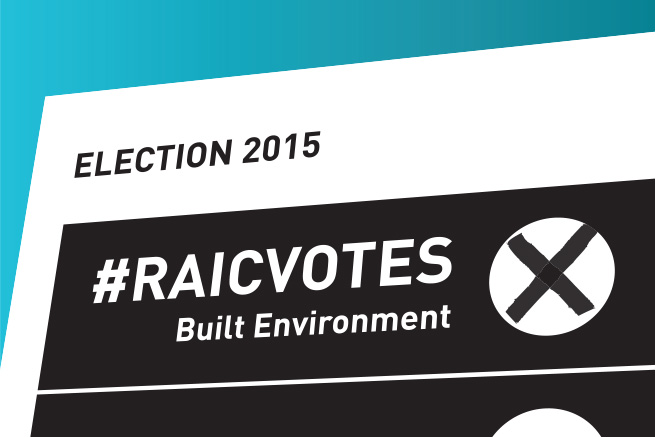 OTTAWA, October 9, 2015–The Royal Architectural Institute of Canada (RAIC) is advocating for better communities during the 2015 federal election campaign with a questionnaire for Canada’s political parties and an election toolkit for architects.

Four parties have responded to the RAIC’s questions about sustainability, design excellence, living conditions on First Nations reserves and Canada Post community mailboxes. The complete responses from the Liberal party, the NDP, the Green party and the Bloc Québécois are posted on the RAIC website. The Conservative party has not yet responded.

The federal government is Canada’s single largest owner of buildings and land. As such, it has a central role in setting the highest standards of excellence and environmental sustainability to maximize the benefits to Canadians, achieve value for money and position Canada as an international leader.

“By investing in appropriate designs and physical structures where we live, work and recreate on a day-to-day basis, we create resilient communities, a strong and diverse economy and healthy workplaces that support greater productivity,” says RAIC President Sam Oboh, FRAIC.

“Understanding the importance of such sustained investment, the RAIC is providing the federal political parties with an opportunity to explain their platforms and elaborate on how they plan to enhance people’s quality of life,” says Mr. Oboh.

In the first of four questions, the RAIC asked the parties if they would support the 2030 Challenge, a set of targets for reducing greenhouse gas emissions from buildings, for new or majorly renovated federal buildings.

In response, the Liberals, NDP, Greens and Bloc pledged to take action to reduce greenhouse gas emissions. The Green party explicitly stated that it supports the 2030 Challenge for carbon neutrality in new federal building construction and renovation.

“Greens will unleash an army of carpenters, electricians and contractors to take outdated and inefficient public buildings…and plug the energy leaks that increase greenhouse gases and costs,” the Green party added.

The RAIC asked how Canada should address the design and construction of First Nation communities, some of which have been compared to refugee camps.

The Liberals, NDP, Greens proposed a “nation-to-nation” relationship with First Nations and to improve funding for housing and infrastructure. The Bloc demanded that the federal government work with Aboriginal nations by investing in better housing, among other actions.

“A Liberal government would immediately lift the two-per-cent cap on funding for First Nations programs and re-engage with indigenous communities …to advance progress on critical issues such as access to adequate housing,” said the Liberals.

When asked if design excellence must be a high priority for federally funded projects, the Liberals, NDP, Greens and Bloc all agreed.

“The NDP is open to working with provinces, territories and municipalities to improve the dialogue, debate and input into the creative processes that contribute to building better communities,” added the NDP.

Lastly, the RAIC asked if Canada Post’s plan to replace home delivery with community mailboxes is the right decision for Canadian communities.

The Liberals, NDP stated they would stop the current plan. The Bloc would oppose it. All four parties said they would ask Canada Post to explore other options.

“Stopping door-to-door mail service and randomly introducing community mailboxes into the landscape will penalize society’s most vulnerable groups such as people with disabilities and seniors,” said the Bloc. “It will also lead to job losses…and create conflicts with local authorities.”

The responses will help RAIC members make informed decisions while the election toolkit provides ideas on how members can elevate awareness on architectural issues in their ridings.

“Canadians don’t spend a lot of time thinking about the quality and cultural value of the built environment, and this can be frustrating for those who are striving to make it more sustainable, more vibrant, and more accessible,” says RAIC First Vice-President Allan Teramura, FRAIC.  “That’s why the RAIC is encouraging our members to make this an election issue in their communities.

“Rather than asking the parties for specific promises or providing endorsements, we chose to use the election as an opportunity to start a conversation with whoever forms the next government,” says Mr. Teramura. “We’re delighted that most of the parties have taken the time to prepare a response.”

The public policy issues identified by the RAIC are not the only issues affecting the built environment. They are issues on which the RAIC has been active in the last year.