Resolution for Urgent and Sustained Action on Climate and Ecological Health 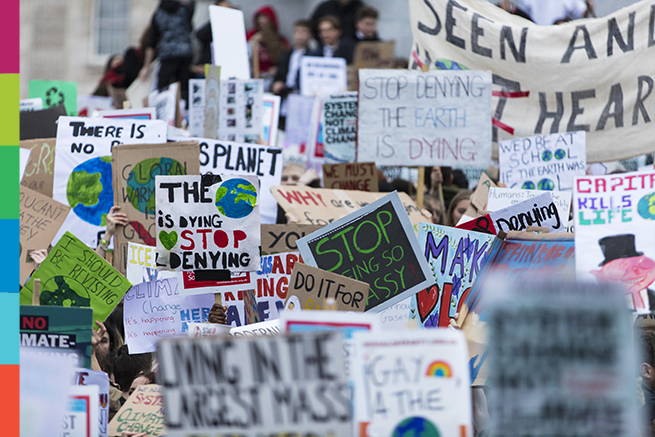 OTTAWA October 26, 2019–The RAIC Board of Directors approved in principle the following Resolution for Urgent and Sustained Action on Climate and Ecological Health at a board meeting on October 26, 2019. The RAIC Committee on Regenerative Environments developed and sponsored the resolution.

The RAIC recognizes that the built environment is a major contributor to climate change, that the continued use of the status quo practice has contributed to the climate emergency, and that architects through their central role in shaping the built environment have both the capability and moral duty to directly enable transformational climate solutions. The intent of this resolution is to provide a framework for the RAIC to prioritize and support urgent and sustained action in order for its members to design for holistic health, resilience, and regenerative built environments.

WHEREAS, the vision of the RAIC is to be the leading voice for excellence in the built environment in Canada, demonstrating how design enhances the quality of life, while addressing important issues of society through responsible architecture.

WHEREAS, the mission of the RAIC is to promote excellence in the built environment and to advocate for responsible architecture.

WHEREAS, the values of the RAIC include: integrity, environmental responsibility, inclusiveness, and effectiveness.

WHEREAS, in 2002, the Sustainable Buildings Canada Committee of the RAIC was transformed into the Canada Green Building Council and the RAIC provided administrative and financial support for this new organization whose vision is a transformed built environment leading to a sustainable future.

WHEREAS, in 2014, the UIA (Union International des Architectes) World Congress confirmed the DECLARATION 2050 IMPERATIVE which recognizes “…the architects’ central role in planning and designing the built environment, and the need to reduce carbon emissions to zero by 2050 and provide equal access to shelter…”, and that the RAIC is a signatory to this declaration.

WHEREAS, in 2015, the Paris Agreement identified climate change as an “urgent and potentially irreversible threat to human societies and the planet… [requiring] the widest possible cooperation.”

WHEREAS, in 2007, the RAIC Board of Directors endorsed the 2030 Challenge which calls for new and renovated buildings to reach net-zero operational emissions by 2030, and net-zero embodied carbon by 2050.

WHEREAS, in 2017, the RAIC Board of Directors approved the creation of the Committee on Regenerative Environments (CORE) and in 2015, the Indigenous Task Force.

WHEREAS, in 2017, the Canada Green Building Council’s report on A Roadmap for Retrofits in Canada confirmed the critical role that existing buildings retrofits play in realizing Canada’s low carbon future and highlighted the potential for Canada to achieve GHG emissions reductions of at least 30 percent (or 12.5 million tonnes) by 2030, and further potential to reach a 51 percent (or 21.2 million tonnes) through energy retrofits.

WHEREAS, in 2018, the International Panel on Climate Change (IPCC) Special Report confirmed the catastrophic consequences of our current trajectory and highlighted that bold action by 2030 will be critical for limiting global heating to 1.5°C—the threshold necessary to mitigate the most disastrous effects.

WHEREAS, in 2019, the Federal Government’s assessment report has since found that Canada is warming at twice the global average, and up to three times as quickly in the North.

NOW, THEREFORE, BE IT RESOLVED, that commencing in 2019, the RAIC prioritize and support architects to accelerate design for holistic health, resilience, and regenerative built environments as a health, safety, and welfare issue through investment in capacity building tools, resources, et cetera.

BE IT FURTHER RESOLVED, that the RAIC integrate the paradigm shifts in thought and action required to designing for holistic health, resilience, and regenerative built environments into the architect’s professional roles and responsibilities and performance standards of its members through current and ongoing revisions of the Canadian Handbook of Practice (CHOP).

BE IT FURTHER RESOLVED, that the RAIC revise the terms of reference for all its awards, prizes, and other listings to include holistic health, resilience, and regenerative built environments principles and metrics and targets; and advocate for its partners, allied organizations, communities and levels of government to do the same.

BE IT FURTHER RESOLVED, that the RAIC support members in the design and delivery of inclusive, ethical and effective holistic health, resilience, and regenerative built environments by revising internal position and policy statements regarding climate, equity and ecological health; including endorsement of the United Nations Declaration on the Rights of Indigenous Peoples (UNDRIP) and the Truth and Reconciliation Commission of Canada (TRC) calls to action.

BE IT FURTHER RESOLVED, that the RAIC prioritize allocation of funding and resources required to support the above.