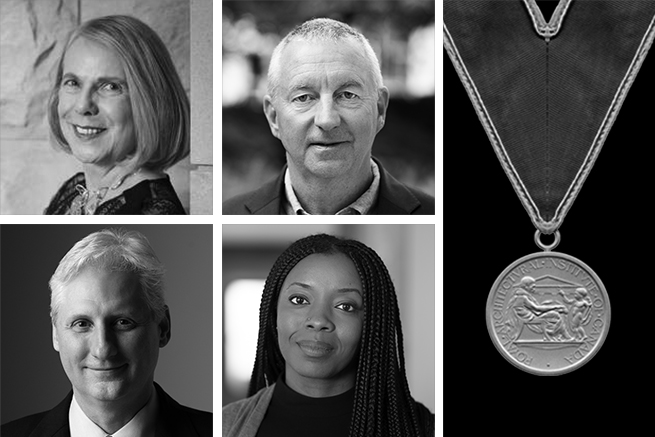 Kevin R. Hydes P. Eng. is internationally renowned as a leader in sustainable design, and for his contributions to the green building movement. His passion for sustainability was recognized with a USGBC Leadership Award in 2019.

As the founder and first CEO & President of Integral Group, Kevin established a reputation as an innovator, pioneer, and green business leader—and grew the firm to encompass more than 800 employees in 21 offices around the world. He continues to push the limits of environmental design and thinking in his current role as Chair of Integral Group's board—a position he assumed in 2020.

Ms. Lucey served as the first woman Chief Executive Officer of the National Council of Architectural Registration Boards (NCARB)—and held the role for over fourteen years. Through NCARB she oversaw the development and enhancement of education standards, strengthening US-Canada architectural reciprocity established under NAFTA, model law for the licensing of architects in the United States, negotiations worldwide on the mutual recognition of credentials, and reciprocity issues for architectural practice.

Mariam Kamara is a founder and principal of atelier masomi, in Niamey Niger, an architecture and research firm through which she tackles a wide variety of public, cultural, residential, commercial, and urban design projects.

Mickey Jacob, FAIA graduated from the University of Detroit School of Architecture in 1981 and relocated to Tampa Florida where he has practiced Architecture for over 39 years and is currently the Regional Vice President for Florida at GMC Architects.

A native of Windsor, Ontario, Mickey has been involved with the American Institute of Architects at every level of the organization. In recognition of his impact on the profession and commitment to leadership, AIA Florida created the “Jacob Leadership Institute” to provide comprehensive leadership training for architects. Additionally, in 2009 Mickey was elevated to the AIA College of Fellows and in 2013 served as the 89th President of the American Institute of Architects.

Comment from the Officers of the College of Fellows
"The RAIC College of Fellows continues to celebrate inspiring architecture nationally and internationally. The College is building an increasingly diverse and inclusive membership while awarding excellence within the discipline. Our 2020 Honorary Fellows are outstanding examples of this ambition."
Honorary Fellowship with the RAIC recognizes extraordinary achievement and impact in the profession. Hydes, Lucey, Kamara, and Jacob will be inducted into the RAIC College of Fellows at the 2020 Convocation ceremony in Edmonton, AB, on June 4, 2020.
Quotes from the Honorary Fellows
"I am delighted to accept my nomination to join the College of Fellows of the Royal Architectural Institute of Canada as an Honorary Fellow. For the Board of Directors to recognize an engineer in this way is an incredible honour for which I am humbled."
–Kevin Hydes, P. Eng
"Being awarded Honorary Fellowship from the RAIC is a significant honour for me, culminating and celebrating many years of working with my Canadian colleagues to improve and facilitate mutual reciprocity for members of our profession in, between, and among Canada, the USA and Mexico. As former Chancellor of the AIA College of Fellows, I am grateful for—and humbled by—the recognition of my colleagues and friends at the Royal Architectural Institute of Canada."
–Lenore M. Lucey, FAIA
"I’m humbled by this incredible distinction the Royal Architectural Institute of Canada has seen fit to award me. Being named an Honorary Fellow of the RAIC is an encouraging acknowledgment of work largely based in Africa that concerns itself with communities, their identities, the environment, the climate, and challenges around spatial justice. I am deeply honoured to be in such illustrious company. "
–Mariam Kamara
"I am thrilled and excited to learn that I have been selected to receive Honorary Fellowship in the RAIC College of Fellows. As a native-born Canadian this is truly one of the most meaningful and emotional highlights of my 39-year career in architecture. The recognition of my work as a leader dedicated to advocating for the creation of sustainable, resilient, beautiful, and inspiring places—that improve the quality of life in our communities—shows that great architecture and service as a Citizen Architect has no borders. I am committed to upholding the international integrity of the RAIC Honorary Fellowship by continuing to engage in the responsibility to find solutions for the challenges we face that will make our world a better place for all. It is my honour to accept this prestigious award."
–Mickey Jacob, FAIA

The Royal Architectural Institute of Canada is the leading voice for excellence in the built environment in Canada. Representing about 5,000 members, the RAIC advocates for excellence works to demonstrate how design enhances the quality of life and promotes responsible architecture in addressing important issues of society.