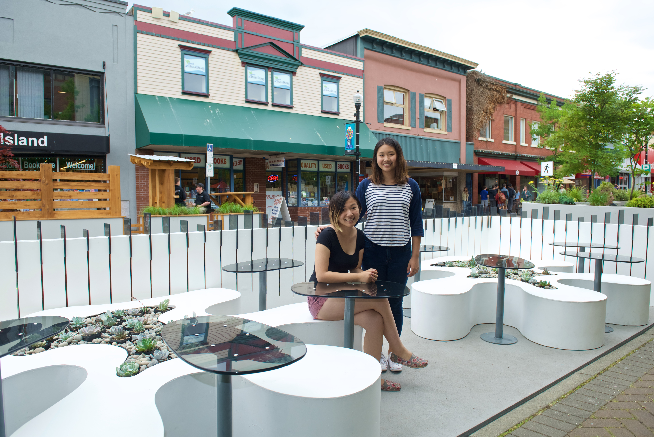 OTTAWA, July 13, 2016– The three parklets that animated downtown Nanaimo this summer may be gone, but their impact on education, public awareness of architecture and design, and community spirit carries on.

Three parking spots on Commercial Street were transformed into mini-parks or “parklets” with seating and plants for public enjoyment during the Royal Architectural Institute of Canada’s (RAIC) Festival of Architecture, June 8 to 11. They were the three finalists’ projects of a high school student design competition, sponsored by the RAIC.

One of the goals of the competition was to engage the community and raise awareness about the importance of public space. “We wanted to advocate for architecture to the public and to make real connections to the community as part of our 2016 RAIC festival theme ‘Connexions,’” said architect David Poiron of the local festival organizing committee.

In the end, the community was engaged on all levels; the designs were realized and built by the Vancouver Island University Carpentry Foundation Program; local companies provided plywood and equipment; Vancouver Island architects mentored the students throughout the process, and the general public enjoyed the parklets as they were intended – for relaxing and socializing. The students took home prize money and a learning experience.

“I can’t tell you how impressed I was with the work of the students who designed and created the parklets,” said City of Nanaimo Mayor Bill McKay.  “I’m just sorry that Nanaimo couldn’t have kept them. These intimate seating areas used in the great weather connect the indoors to the outdoors, the buildings to the street, and promote connectivity between people.”

The first place award went to Team Monster Club, which consisted of students Jasmine Yu and Fo Wu of St. Michaels University School in Victoria, BC. The jury praised Team Monster Club’s “great exploration of colour, texture and sculptural form.” The received a $900 team prize plus $2,000 for their school, where the parklet is now located. Their design evoked an urban backyard with a fence, raised planter bed, built-in tables and roof trellis, all of heavy timber. The parklet contained 22 feet of seating, including benches made of beautiful slabs of wood, plus three barstools. There was space to stand and lean, with trees providing shade.

The jury called it a “lively space with a variety of elements to appeal to a variety of users.” GISS Junior Design’s parklet is now located at Vancouver Island University Duncan Campus, BC. They received a $600 team prize plus $1,000 for their school.

Third place (as well as the People’s Choice Award, as chosen by festival delegates and the general public) went to NC Aspengrove from Aspengrove School in Lantzville. The team was comprised of students Christopher Dwerryhouse and Nathaniel Maguire. They took home a $300 team prize plus $500 for their school. In their design, curving white planters surrounded a welcoming outdoor room that opened to pedestrians on the sidewalk. Flowers and grasses reinforced the sense of enclosure. Two booths with round tables and semi-circular benches nestled into the curved walls and offered spaces for small groups. A long bench flanking the sidewalk invited passers-by to pause.

The jury praised “the contrast in material from outside to inside and the rippling, organic shape of the interior space.” NC Aspengrove’s parklet is now located in downtown Qualicum Beach, BC.

RAIC President Allan Teramura was impressed with all three parklets. “The designs demonstrated a surprising level of sophistication and maturity, given that they were created by kids with no design training,” he said. “Also, judging by local media coverage, the idea that non-professionals, kids no less, could be empowered to make changes in the urban environment clearly resonated with people.”

Nineteen high school teams from across Vancouver Island submitted designs for the competition. Local architects, as well as high-profile figures in the international architectural community, acted as judges for the competition. Among the jury members were Jane Duncan, President of the Royal Institute of British Architects, and Elizabeth Chu Richter, President of the American Institute of Architects.

A parklet is an extension of the sidewalk, typically the size of a parking spot, that provides public space and amenities. Parklets originated in 2005 in San Francisco. Since then, cities across North America, including Los Angeles, Chicago, Toronto, Montreal, and Vancouver, have launched either individual parklets or full-fledged parklet programs.