Press Release: Jerome Markson announced as the recipient of the 2022 RAIC Gold Medal 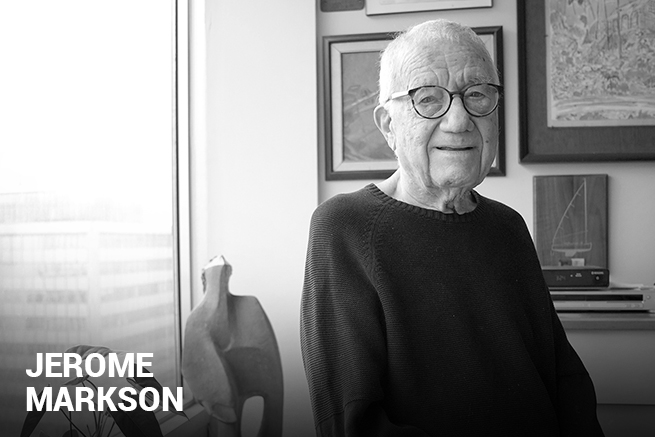 OTTAWA, April 1, 2022 – The Royal Architectural Institute of Canada (RAIC) is pleased to announce Jerome Markson as the recipient of the 2022 RAIC Gold Medal.

“Jerome Markson exemplifies all qualities that are deserving of the RAIC Gold Medal. His nearly six-decade-long architectural practice will be recognized as an outstanding contribution to Canadian architecture with an everlasting influence, demonstrated through his work that is carefully woven into the culture, places and time it is set.” -John Brown, President RAIC

Jerome Markson’s built and projected works are both skillful and expansive in scope, spanning the gamut of building types and programs that are possible within architectural practice. Imbued with a masterful level of architectural craft and character, his works reflect his decades-long pursuit of a more open and inclusive expression of modernity. The longevity of Markson’s practice itself is a testament not only to his extraordinary commitment, dedication and achievements in architecture over many years, it also speaks to the continued relevance of his work to quite diverse audiences during times of great change, and over time.

He opened his practice, Jerome Markson Architect, in a post-war era of profound social, economic, and physical transformation in Canada, in 1955. Urban planner Macklin Hancock succinctly described the ambition of that time: “Canada suddenly flowered, it wanted to be modern, it didn’t want to be ancient....” Markson's architecture stands as among the most important, and distinguished, records of this critical time period in the country’s becoming. His buildings are harbingers of important shifts in sociopolitical attitudes, urban policies, and modes of architectural production as these evolved during second half of the twentieth century, and into the twenty-first, in Canada and North America.

Markson’s architectural and urban works have won numerous design awards over the course of his career. His important contributions to the field of architecture, architectural education, and the arts have likewise been recognized in prestigious career awards: he is a Fellow of the Royal Architecture Institute of Canada; and a recipient of the Toronto Society of Architects DaVinci Award, the University of Toronto Arbor Award, and the Ontario Association of Architects Lifetime Design Achievement Award. His work has been extensively published and reviewed in national and international journals, magazines, and newspapers. He has served on prestigious juries and awards committees, and he has led professional organizations such as the Toronto Society of Architects.

Jerome Markson has always preferred to direct his attention and energies to the work at hand – the next design challenge. In his approach to architectural design and urbanism, which subtly combines technical skill, material craft, spatial experimentation, and city building, Markson is the epitome of an ‘architect’s architect;’ yet his contribution and distinction also lies in how he brought these formidable talents to bear for a much larger, more diverse range of people and places.

About the RAIC
The Royal Architectural Institute of Canada (RAIC) is a not-for-profit, national organization dedicated to representing architects and architecture since 1907. The RAIC is the only national voice for excellence in the built environment in Canada focused on providing Canada’s architectural community with the tools, resources, and education to elevate their practice. The RAIC is committed to showcasing how design enhances quality of life, while advocating for important issues of society through responsible architecture. The RAIC’s purpose is to create a better world for all by empowering Canada’s architectural community. Through our work, the organization envisions a strong architectural community that is valued and empowered to create change. The RAIC’s national office is based in Ottawa with a growing federated chapter model. Current chapters and networks are based in British Columbia, Alberta, and Nova Scotia.