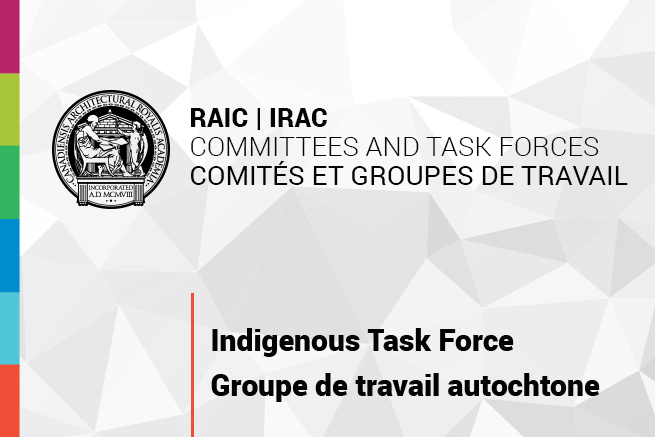 About the Indigenous Task Force

The Royal Architectural Institute of Canada (RAIC) Indigenous Task Force (ITF) was officially launched on June 09, 2016 in Snuneymuxw territory (Nanaimo, British Columbia) during the 2016 RAIC Festival of Architecture. “The Task Force seeks ways to foster and promote Indigenous design in Canada”, said then RAIC President Allan Teramura, FRAIC, who was instrumental in founding the Indigenous Task Force. The ITF is chaired by Dr. Patrick Luugigyoo Stewart (Nisga’a), MRAIC. Over 30 individuals who are Indigenous or who work in Indigenous contexts are members of the ITF, including architects, designers, academics, intern architects and architectural students.

The core purpose of the ITF is to foster and promote Indigenous design and architecture in Canada in rural, Métis and Northern communities, First Nations and urban spaces and to advocate with and on behalf Indigenous communities. The Royal Architectural Institute of Canada and the ITF alike believe strongly that Architecture is a public-spirited profession with an important role in reconciliation – addressing injustices by giving agency back to Indigenous people. The Canada Council for the Arts announced today that the Indigenous design project UNCEDED has been selected through a national juried competition to represent Canada at the 2018 Venice Architecture Biennale. Doubling its previous investment to enhance international exposure, the Canada Council will make a contribution of $500,000 towards the presenter’s exhibition. OTTAWA, June 20, 2017 – The former United States embassy building in Ottawa is not a culturally appropriate space for an Indigenous Centre, says the Indigenous Task Force of the Royal Architectural Institute of Canada (RAIC), on the eve of National Aboriginal Day.

“Indigenous people always get the hand-me-downs, the buildings, and land that settlers no longer have a use for,” says the task force, composed of about 30 mostly Indigenous architects, architectural students, interns and academics. “Canada's Indigenous communities have, for too long, been forced into leftover spaces that fail to connect in any meaningful way to their cultures and unique connectivity to place.

“Adding to the frustration, sacred sites and disputed lands, such as the islands in the Ottawa River between Ontario and Quebec which acted as an Indigenous gathering place for thousands of years, are being developed without adequate consensus from the Indigenous community.”