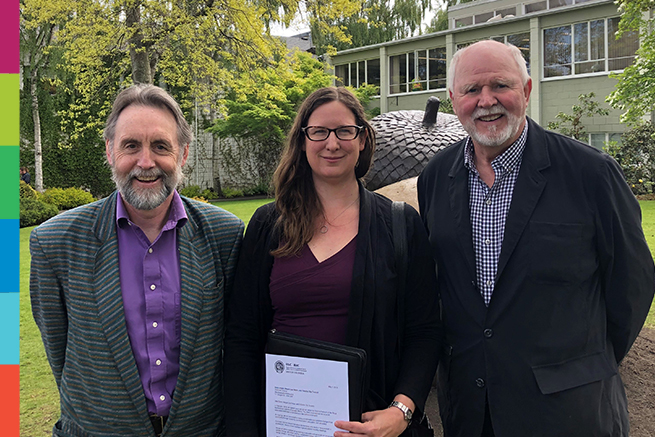 Members of the new Victoria Network of the RAIC British Columbia Chapter have embraced the role of architects as advocates and are celebrating their first win.

On April 3, a dozen members of the network gathered at CityStudio Victoria, an innovation hub. The topic: What is our community’s biggest issue that we should focus on this year? The answer: climate change. “It was our social responsibility as leaders,” notes Carrie Smart, MRAIC, chair of the Victoria Network and the RAIC British Columbia Chapter.

Just five days later, the group found the opportunity they were looking for in Oak Bay, a picturesque coastal community on the southern tip of Vancouver Island. Oak Bay is one of the 13 municipalities of Greater Victoria and a member municipality of the Capital Regional District.

The agenda included a report by the Capital Regional District (CRD) asking all regional municipalities to declare a climate emergency to move toward carbon neutrality by 2030. Staff put forth the item, not for action, but information only.

Smart, D’Ambrosio, and Williams urged the seven-member council to take concrete steps instead.

“This is an important initiative, and I believe we need to talk about how this municipality is going to take its draft strategic priority of climate change and transfer that priority into measurable goals and outcomes,” Smart told the mayor and councillors. “Oak Bay will publicly strengthen that commitment by joining other CRD municipalities in this declaration. We need to take action, and we need you to lead us in those actions.”

For his part, Williams proposed that council dedicate adoption of the report to former mayor Nils Jensen who had died the day before.

“We need to set goals in order to make progress,” said D’Ambrosio. “Please lead us into action with a reinstated committee or task force.”

To the delight of the network members, the council voted unanimously in favour of declaring a climate change emergency. They also moved to set up a task force.

“Declaring a climate emergency does acknowledge the severity and the extreme threat posed by climate changes to citizens of the district and the region,” said Councillor Andrew Appleton.

It “clearly communicates the role that a municipality plays in addressing climate change impacts, including fostering compact communities served by public and sustainable transportation modes, as well as high-efficiency standards for new construction and municipal operations,” he said.

“I think it was a very good idea to do it in memory of Nils Jensen,” added Councillor Cairine Green.

“The RAIC’s new chapter development is already succeeding in supporting advocacy in our local communities,” says Smart. “We look forward to seeing what we can achieve nationwide.”

READ THE LETTER TO THE COUNCIL