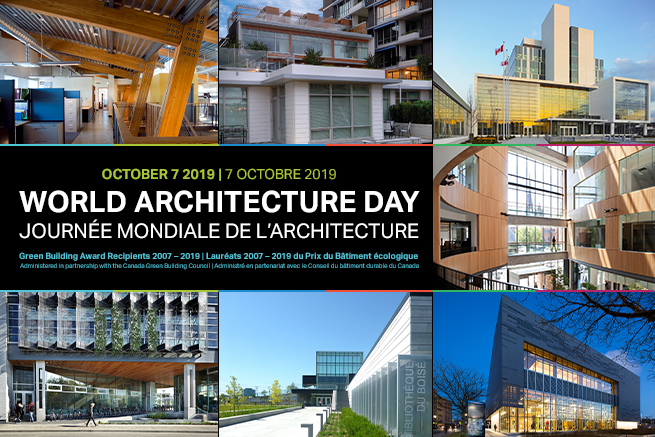 OTTAWA, October 7, 2019 — On World Architecture Day, the Royal Architectural Institute of Canada (RAIC) is calling on architects to lead in the fight against climate change and bring discussion of the built environment to the federal election.

In response to the 2019 World Architecture Day theme, “Architecture...housing for all”, the RAIC is focusing on sustainable and climate-resilient design.

A 2019 federal government report has found that Canada is warming twice as fast as the rest of the world. Extreme weather events damage and destroy housing and increase displacement. Climate-related disasters in Canada have resulted in billions of dollars in damage and are becoming more frequent. For example, the Fort McMurray wildfire (2016), and flooding in Alberta (2013) and Quebec (2017).

As designers and product specifiers, architects can make a big difference. Architecture addresses not only energy-efficiency but also land use, materials choice, construction waste, and water consumption.

Architects in Canada are already designing for sustainability and resilience, and some firms are pledging to increase their efforts by signing a declaration issued on September 20, 2019.

The declaration, titled Canadian Architectural Professionals Declare Climate and Biodiversity Emergency and Commit to Urgent and Sustained Action, is a grassroots effort developed by architects across Canada and members of the RAIC Committee on Regenerative Environments.

A companion document, Designing for the future, outlines six actions that Canadian architects can implement to reduce the carbon footprint of their projects.

So far, about 150 firms, organizations, and individuals have signed the declaration.

The federal government is Canada’s single largest owner of buildings and land. It should have a central role in setting the highest standards of excellence and environmental sustainability.

During the 2019 election campaign, the RAIC seeks to engage political candidates, along with the public, in a discussion about the importance of architecture and urban design in shaping a sustainable future for Canada.

The RAIC has sent the political parties four questions on sustainability and resilience, a National Architecture Policy, First Nations communities, and procurement. It will share the responses in a media release and on the RAIC website and send them to RAIC members.

The RAIC urges its members to send the questions to the candidates in their ridings and to vote accordingly.

World Architecture Day was established in 2005 by the International Union of Architects (UIA) to “remind the world of its collective responsibility for the future of the human habitat.”

It is celebrated every year on the first Monday in October to coincide with the United Nations World Habitat Day.

For 2019, the UIA has chosen the theme “Architecture… housing for all”. It will focus on how architects can contribute to the realization of affordable housing, and the implementation of the UN’s New Urban Agenda; and the Sustainable Development Goals specifically the goal “to make cities and human settlements safe, inclusive, resilient, and sustainable.”