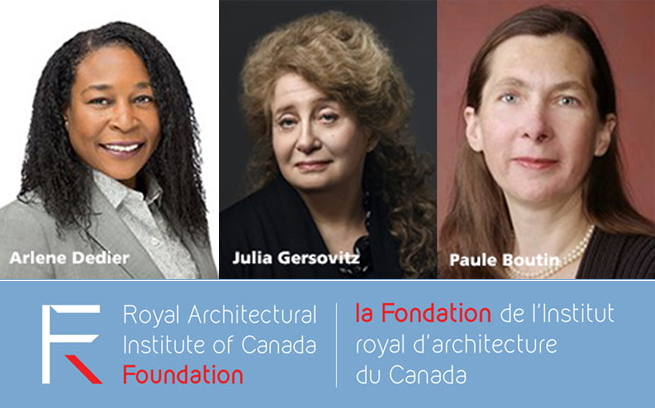 The RAIC Foundation is pleased to welcome three new appointees to its Board of Trustees. Each one brings their unique expertise, energy and experience to the Foundation, and we look forward to working together as we enter a period of renewal and expansion.

Paule Boutin, MOAQ, AP/FIRAC
Completed her Bachelor of Architecture at Université Laval in 1982 and has been a member of the Ordre des Architectes du Québec since 1984. She founded the firm Boutin Boissé Architectes in 1986 and has run her own firm Paule Boutin Architecte since 1990.

Arlene Dedier, B.Arch., Assoc. AIA, LEED GA, PMP
Has an extensive background in architecture and construction in the commercial, industrial, retail, and hospitality industry. With a lifelong interest in design, Arlene began a career in architecture and real estate development following the completion of her architecture degree at Carleton University's School of Architecture.

Arlene has a long history of service within her community and CRE industry as a past president of the Washington Real Estate Group, Board member of the DC based Spanish Education Development Center, and former member of the Sponsorship Committee of the African American Real Estate Professionals and Commercial Real Estate Women (CREW). She continues her community involvement, through work with Eva’s Phoenix, and Toronto CREW’s Inclusive, Equity, Diversity, and Allyship (IDEA) Committee.

Julia Gersovitz, O.C. Conservation Architect, Architectural Historian, FRAIC
Is a founder of EVOQ Architecture. Over four decades, Julia has established an international reputation as a leader in the theory and practice of conservation architecture. Her ability to reconcile conservation requirements with contemporary expectations has been recognized in numerous award-winning projects including the West Block of Parliament in Ottawa, Toronto's Union Station, the McGill Arts Building and the Harbour Commissioners’ Building in Montreal. Her first conservation project, Maison Alcan, was declared a national monument by the Government of Quebec in 2018.

The foundation manages a portfolio of annual and biannual awards, scholarships and endowments designed to promote public discussion of architectural ideas affecting society; support scholars in advanced research relating to community and the built environment; and assist students and interns in their architectural programs.