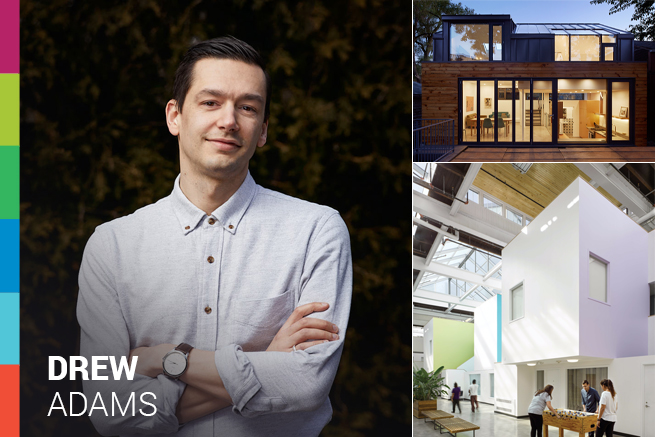 OTTAWA, April 23, 2020—Drew Adams MRAIC, a Toronto-based architect who integrates a passion for sustainability with excellence in the built environment, is the recipient of the 2020 Emerging Architect Award from the RAIC. This prize was previously known as the Young Architect Award, and Adams is the inaugural recipient following the renaming in 2019.

The Emerging Architect Award is to recognize an emerging architect for excellence in design, leadership and/or service to the profession. It is intended that this award will inspire other individuals to become licensed and to strive for excellence in their work.

An Associate at LGA Architectural Partners, Drew has made instrumental contributions to a distinguished portfolio of aspirational community-building projects that demonstrate clear alternatives to the status quo and better futures for those who use them. Drew inspires others with his genuine curiosity, his sense of responsibility, his optimism and practicality, and his multi-disciplinary problem-solving strategies—paving the way for a new activist approach to architectural practice.

“Drew’s work displayed an impressive commitment to the benefits of material research, technical explorations of building systems, energy modelling, and daylight studies all in the service of designing and building a more inclusive living environment for those most in need in our communities,” said the 2020 jury in a collective statement. “Drew’s commitment to the design office collaborative as a social tool to advance our knowledge in regeneration projects such as Evergreen Brickworks also supports and promotes the notion of self-advancement within a greater group.”

Growing up in the suburbs of Toronto, Drew’s worldview was most influenced by the people around him. He was instilled with a deep sense of responsibility and appreciation for the environment and, importantly, was shown the capacity for an individual to reshape the world.

For example, his mother, a botanist, started a not-for-profit to educate students about science and the environment—and his grandfather authored the first Ontario Building Code transforming practice in Ontario.

Drew began studying urban planning, with a specialty in urban design and a minor in geography, at the University of Waterloo. There, he learned the impacts of the systems affecting how—and where—we build. Following this, Drew completed his Master of Architecture at the University of Toronto, pursuing multidisciplinary courses at every chance and graduated with distinction and nearly ten academic awards, including the RAIC Honour Roll and Irving Grossman Thesis Prize for housing.

Drew joined LGA Architectural Partners nearly seven years ago, and it is with the firm that he’s hit his stride. Drew has taken on increasing leadership-focused roles within the studio and has made significant contributions to shaping many of LGA’s recent high-profile projects, such as Eva’s Phoenix Youth Transitional Housing Centre, Evergreen Brick Works’ Future Cities Centre, and the Lippincott Laneway House.

His work extends to a wide range of projects, including nearly a dozen housing projects focused on affordability, a diverse array of projects with Indigenous communities, numerous heritage and adaptive reuse projects, and other works that are united by community impact.

Drew is a frequent speaker at many conferences, delivering guest lectures at the University of Toronto, Ryerson University, the University of Waterloo School of Architecture, as well as the Future Cities Summit, the Green Building Festival, the UofT hosted Biophilic Design Panel and Habitat for Humanity’s National Conference. Drew has authored pieces for Spacing magazine and Landscapes I Paysages, among others, and has been writing and co-authoring a series of articles for AZURE on design and climate change. “We Need to Decarbonize Architecture Now” was among AZURE’s most-read articles of 2019.

“He demonstrates an impressive commitment to mentoring and education as well as public speaking engagements all in the promotion of architecture in the community,” said the Jury.

Drew’s contributions to architecture have garnered wide recognition, including 11 major awards ranging from design excellence to technical achievement. This includes a nomination for the prestigious Mies Crown Hall Americas Prize, a biennial award recognizing excellence in built works of architecture across North and South America, the Jury Prize for Social Good in the international FRAME Awards, the OAA Design Excellence Award, the Ontario Concrete Award for Material Development and Innovation, the Canada Green Building Award, and the RAIC National Urban Design Award—among others.

Due to the cancellation of the 2020 Conference because of the COVID-19 pandemic, Drew Adams will be honoured as the award recipient at the RAIC 2021 Conference on Architecture in Montreal, QC.

The Royal Architecture Institute of Canada (RAIC) is a not-for-profit, national organization that has represented architects and architecture for over 100 years, in existence since 1907. The RAIC is the leading voice for excellence in the built environment in Canada, demonstrating how design enhances the quality of life, while addressing important issues of society through responsible architecture. The RAIC’s mission is to promote excellence in the built environment and to advocate for responsible architecture. The organization national office is based in Ottawa with a growing federated chapter model. Current chapters and networks are based in British Columbia, Alberta and Nova Scotia.