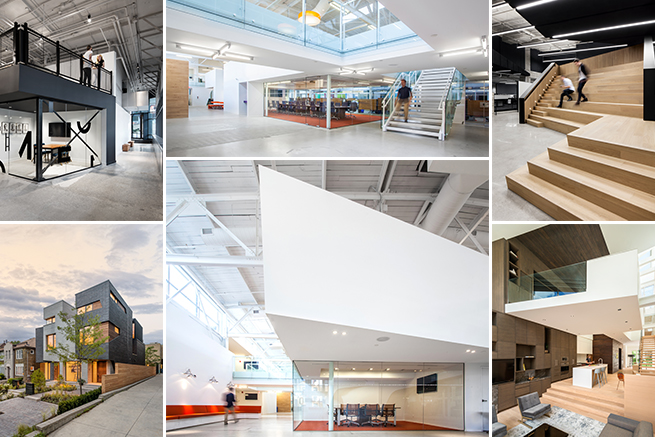 OTTAWA, April 4, 2018 – Luc Bouliane, MRAIC, a Toronto architect whose designs are inspired by the geology of Northern Ontario, will receive the 2018 Young Architect Award of the Royal Architectural Institute of Canada (RAIC).

Recent projects include the 2015 expansion and renovation of the National Museum of Immigration at Pier 21, in Halifax, NS, (with architect David J. Agro). In Toronto, they include the Bensimon Byrne ad agency in the CBC Building (2016); renovations to the York University Student Centre (2012), and the widely published Relmar Houses in Toronto (2015), awarded a Tucker Design Award for excellence in the use of natural stone.

“Great design and work,” said the five-member selection jury. “He’s on a different trajectory for a young office. He has pursued larger public work from the very beginning, including commercial work, which is unusual.

“His work has strong sculptural qualities,” the jury said. “It’s interesting. The spaces are dynamic in terms of composition, shapes, and forms, and the level of detail.”

The award will be presented at the RAIC/AANB Festival of Architecture which takes place in Saint John, NB from May 30 to June 2.

Mr. Bouliane credits his upbringing in the northern community of Sault Ste. Marie, surrounded by Lake Superior and rock outcrops,for the geologically inspired and geometrically complex forms of his designs.

A graduate of the University of Waterloo’s architecture program, Mr. Bouliane worked for 10 years for Teeple Architects in Toronto before establishing Lebel & Bouliane in 2010 with his partner Natasha Lebel.

The eight-person studio has developed a body of work with a focus on cultural institutions, adaptive re-use projects in heritage buildings, and custom residences.

Current projects include a new Clearview Public Library branch in Stayner, ON, and renovations to both New College at the University of Toronto, and the Toronto office headquarters for Sidewalk Labs.

Mr. Bouliane has been a guest lecturer and critic at the University of Waterloo School of Architecture and OCAD University, as well as a critic at Ryerson University. In 2015, his work was part of Twenty + Change, an exhibition showcasing emerging practices in Canada.

“Throughout my career, I have been very fortunate to work with clients who share a commitment to design excellence and recognize the value of a strong design concept,” he says. “Their trust and enthusiasm have provided the opportunity for meaningful architectural exploration and innovative solutions to their unique design challenges.”