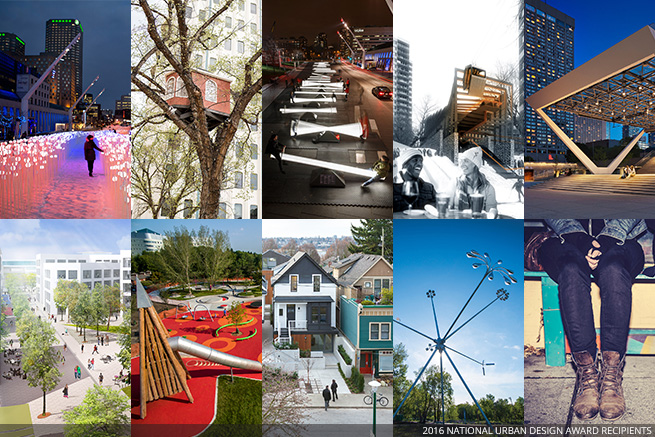 OTTAWA, April 11, 2016 — Nine cities across Canada “have been enriched by the addition of remarkable urban design initiatives,” says the jury of the 2016 National Urban Design Awards.

“The quality of the submissions this year was impressive,” said the three-member jury. “These unique solutions displayed a refreshing inventiveness and a strong commitment to the overarching objective of urban design to respond to and enhance the immediate surroundings and wider community.”

The awards are part of a two-tier program held in cooperation with Canadian municipalities. The National Urban Design Awards program judged winners of the 2015 municipal awards and entries submitted at large.

The awards will be presented during the RAIC’s Festival of Architecture to be held in Nanaimo from June 8-11.

The Royal Architectural Institute of Canada (RAIC), the Canadian Institute of Planners (CIP), and the Canadian Society of Landscape Architects (CLSA) are pleased to announce the 2016 National Urban Design Award winners in the following categories:

“…a successful revitalization of a civic heart that draws people in with an enduring, timeless, restrained intervention.”

“This project offers a new and vibrant interpretation of this basic piece of public furniture and cuts directly to what community initiated urban design should be.”

“...evokes thoughts of human habitat and urban wildlife while making a connection to the built fabric.”

“…a thought provoking reclamation of an artifact of a previously polluting industry. It is a powerful statement of urban renewal.”

“…achieves an elegant solution that is both simple and profoundly important in creating a precedent for infill densification.”

“The design creates a public realm with high degree of pedestrian connectivity and permeability.”

“… innovative and playful and brings people out into the city.”

The following are recognized with Special Jury Awards:

“…a positive example of how design processes can educate community members about sustainability.”

“…a fun, exciting and unique design that leads the way in public engagement.”

Certificates of Merit are awarded in the following categories:

“The old brick buildings successfully became assets for the new design rather than barriers to its execution.”

“ While this body did not officially enter the urban design competition, its programming for this annual competition has been so critical in facilitating the award-winning designs that they merit acknowledgement as important agents of successful urban design.”

“This project takes a number of under-utilized parking spaces and animates them with a simple and elegant design. The materials are modest and the execution is effective.”

“This previously moribund series of spaces were effectively rediscovered and animated with high quality pedestrian spaces.”

ABOUT THE CANADIAN INSTITUTE OF PLANNERS

The Canadian Institute of Planners (CIP) is the national voice of Canada’s planning profession. Since 1919, CIP has been dedicated to the advancement of responsible planning throughout Canada. CIP has a membership of more than 7,800 professional planners. It collaborates with provincial planning institutes and associations to promote professional standards, training and certification, as well as best practices in planning across Canada. Visit www.cip-icu.ca.

ABOUT THE CANADIAN SOCIETY OF LANDSCAPE ARCHITECTS

The Canadian Society of Landscape Architects (CSLA) is a professional organization with over 1,800 landscape architects as members represented by provincial and territorial associations plus academic programs across the nation. The CSLA is an advocate for its members on issues such as urban renewal, sustainable development and cultural heritage. www.csla-aapc.ca