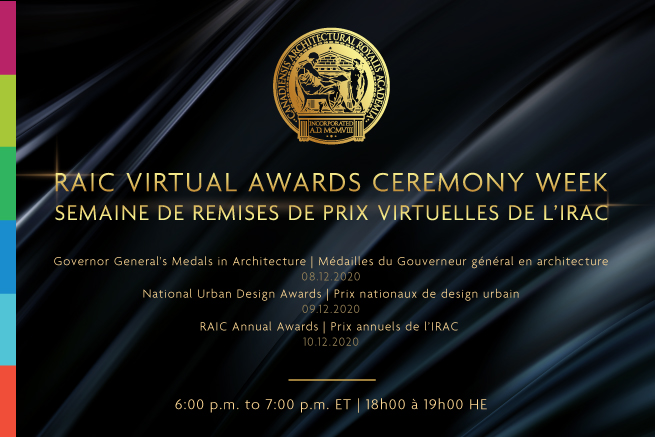 OTTAWA November 25, 2020: The Royal Architectural Institute of Canada (RAIC) is celebrating and recognizing excellence in architecture, that has been honoured over the past year, during the RAIC Virtual Awards Ceremony Week.

This week of celebration is in partnership with the Canada Council for the Arts, the Canadian Society of Landscape Architects (CSLA), and the Canadian Institute of Planners. From December 8 to December 10, virtual award ceremonies will take place for the full portfolio of honours and awards from the RAIC for 2020. Throughout the three evenings, hear from the teams behind the awarded projects, and celebrate excellence in Canadian architecture. Each ceremony will be broadcasted live over both Facebook and Twitter for virtual viewing.

The schedule for the week is as follows:

Governor General’s Medals in Architecture and

The Governor General’s Medals in Architecture recognize outstanding achievement in recently built projects by Canadian architects. This program—created by the RAIC—contributes to the development of the discipline and practice of architecture and increases public awareness of architecture as a vital cultural force in Canadian society. These awards are administered jointly with the Canada Council for the Arts.

The Governor General’s Medal in Landscape Architecture (GGMLA) is the highest honour bestowed on a landscape architect by the CSLA. The medal intends to honour exceptional landscape architects, whose lifetime achievements and contributions to the profession have had a unique and lasting impact on Canadian society.

The celebration will be presented virtually by the RAIC, the Canada Council for the Arts, and CSLA.

The National Urban Design Awards are a Canadian program established in 2006 by the RAIC in partnership with the Canadian Institute of Planners (CIP) and the Canadian Society of Landscape Architects (CSLA). The program showcases excellence in urban design, raises public awareness of the role of urban design in sustainability and quality of life in Canadian cities, and recognizes the contributions of individuals, organizations, firms, and projects.

In 2020, there are seven award recipients and five certificates of merit, representing different categories of urban design projects. The awards are part of a two-tier program held in cooperation with Canadian municipalities.

The celebration will be presented virtually by the RAIC, CIP, and CSLA

This celebration event will feature the following award recipients:

This award recognizes an emerging architectural practice that has consistently produced distinguished architecture. The award recognizes the achievements of the practice for the quality of their built work, service to their clients, innovations in practice and public recognition.

This award is to recognize an emerging architect for excellence in design, leadership or service to the profession. It is intended that this award will inspire other individuals to become licensed and to strive for excellence in their work. The award was previously called the Young Architect Award.

Presented by the RAIC and the National Trust for Canada, this award recognizes buildings over 25 years old that have become landmarks of Canadian architecture. The prize celebrates design quality as well as enduring excellence, recognizing the design of the original architect or firm as well as the on-going stewardship of the owner of the building. The National Trust for Canada is Canada’s national charitable not-for-profit organization that works to save and renew Canada’s historic places.

The Gold Medal recognizes a significant body of work deemed to be a major contribution to Canadian architecture and having a lasting influence on the theory or practice of architecture, either through demonstrated excellence in design, research, or education.

The Royal Architectural Institute of Canada (RAIC) is a not-for-profit, national organization that has represented architects and architecture for over 100 years, in existence since 1907. The RAIC is the leading voice for excellence in the built environment in Canada, demonstrating how design enhances the quality of life while addressing important issues of society through responsible architecture. The RAIC’s mission is to promote excellence in the built environment and to advocate for responsible architecture. The organization's national office is based in Ottawa with a growing federated chapter model. Current chapters and networks are based in British Columbia, Alberta and Nova Scotia.

ABOUT THE CANADA COUNCIL FOR THE ARTS

The Canada Council for the Arts is Canada’s public arts funder.

The Council’s grants, services, initiatives, prizes, and payments contribute to the vibrancy of a creative and diverse arts and literary scene that reaches across Canada and abroad. The Council’s investments foster greater engagement in the arts among Canadians and international audiences.

ABOUT THE CANADIAN INSTITUTE OF PLANNERS

The Canadian Institute of Planners (CIP) is the national voice of Canada’s planning profession. Since 1919, CIP has been dedicated to the advancement of responsible planning throughout Canada. CIP has a membership of more than 7,800 professional planners. It collaborates with provincial planning institutes and associations to promote professional standards, training and certification, as well as best practices in planning across Canada. Visit www.cip-icu.ca.

ABOUT THE CANADIAN SOCIETY OF LANDSCAPE ARCHITECTS

The Canadian Society of Landscape Architects (CSLA) is a professional organization with 2,348 landscape architect members, 615 associate (or intern) members and 669 student of landscape architecture members. As the voice of the profession in Canada, the CSLA is an advocate for its members on issues such as urban design, urban renewal, sustainable development, human health and well-being, climate change and cultural heritage.www.csla-aapc.ca