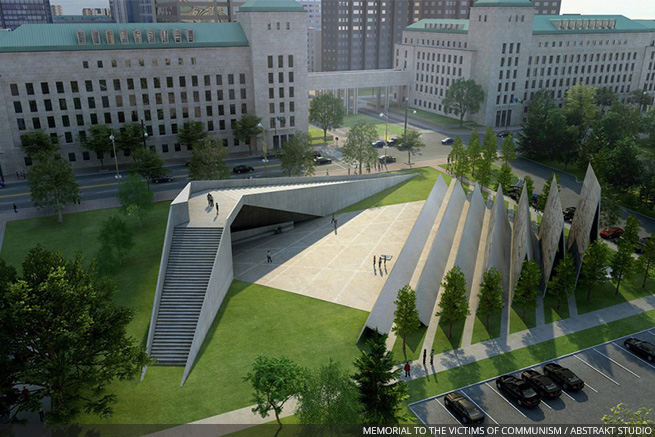 OTTAWA, January 20, 2016 – The Royal Architectural Institute of Canada (RAIC) and fellow applicants today discontinued a court case against the National Capital Commission (NCC) challenging its decision to start excavating the site last summer for the National Memorial to the Victims of Communism.

On Wednesday, lawyers for the RAIC, Heritage Ottawa and architects Barry Padolsky, FRAIC, and Shirley Blumberg, FRAIC, filed a notice of discontinuance of the legal action to the Federal Court of Canada. The discontinuation immediately followed a decision by the NCC board on Wednesday to rescind land use and decontamination approval for the memorial, thus formalizing the federal government's decision to move the monument.

“The RAIC is delighted to be ending the legal proceedings, and look forward to a more appropriate commemoration being proposed,” said RAIC President Allan Teramura, FRAIC.

“We encourage the government to re-examine the governance of planning in the capital, so that the careful planning that has shaped Ottawa for the last 100 years will not be undermined by short-term thinking and political influence.”

Last June, the RAIC, Heritage Ottawa, Padolsky and Blumberg filed an application in the Federal Court. The application challenged the NCC’s decision to break ground for the memorial on a site in the judicial precinct, immediately southwest of the Supreme Court of Canada and on the north side of Wellington Street in Ottawa.

The lawsuit alleged that the NCC violated its procedures for public consultation, and acted against the National Capital Act in its hasty decision to prepare the site despite having no finalized and approved design for the memorial.

As a result, the federal government agreed not to take any steps until after the federal election last October.

Since then, the newly elected government has announced it will seek approval from the NCC for the Garden of the Provinces and Territories on Wellington Street as the location for a new memorial. The government is also reviewing the design considerations.

The RAIC was a member of a coalition of civil society organizations and individuals that campaigned for about a year to persuade the former government to relocate the memorial.

They argued that the government’s Long Term Vision and Plan for the Parliamentary and Judicial Precinct should guide the development of the site. In the plan, the site is intended for a new building for the federal court. This building would complete a “Judicial Triad,” consisting of the Supreme Court of Canada to the north, flanked by the Justice Building to the east, and a federal court on the parcel to the west. It is meant to complement the “Parliamentary Triad” of the Centre, East, and West Blocks; together they create a cultural landscape that represents Canada’s core democratic institutions.

The applicants did not oppose the commemorative intent of the memorial and believed that other appropriate sites exist.

Canadians across the country donated to the legal fund. The remaining amount will go to Ottawa United for Refugees, a charity helping Syrian refugees.