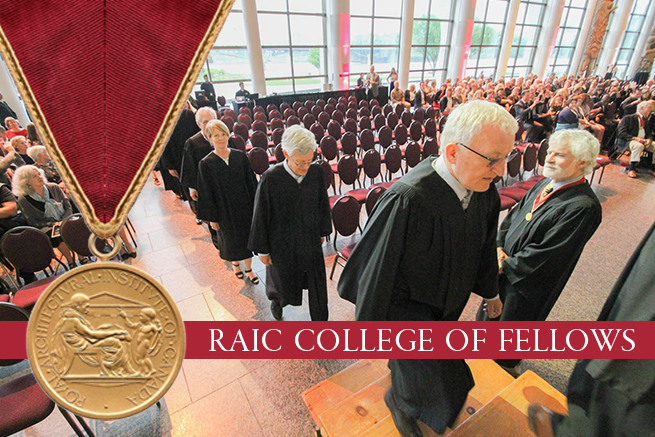 OTTAWA, April 18, 2018 – A Toronto specialist in culinary education; the project architect for Vancouver’s largest transit-oriented development, a Calgary-based aviation design expert, and a Quebec architecture policy champion are among the Canadian architects to be named 2018 Fellows.

The College of Fellows of the Royal Architectural Institute of Canada (RAIC) bestows Fellowship to RAIC members in recognition of outstanding achievement. Criteria include design excellence, exceptional scholarly contribution, or distinguished service to the profession or the community.

See the full list below. Photos and citations are available from the RAIC.

Fellows will be inducted at the College of Fellows Convocation, which takes place during the RAIC/AANB Festival of Architecture in Saint John, May 30 – June 2.

In addition, the College of Fellows will induct four Honorary Fellows:

Diébédo Francis Kéré,a Berlin-based architect from Burkina Faso, will deliver the keynote address at the convocation ceremony on May 31. With projects across Africa, and in Europe, China and India, Kéré is known for combining traditional building techniques and materials with modern engineering methods.

Odile Decq, of Paris, is an award-winning French architect, urban planner and academic, who recently started a school of architecture. Her portfolio ranges from art galleries and museums to social housing and infrastructure. Decq will speak at the RAIC Foundation Luncheon on May 31.

William J. Stanley III, of Atlanta, Georgia is an American architect, a trailblazer for architects of African descent and a community leader.

John R. Sorrenti, of Mineola, New York, is an American architect who has made a significant contribution to the associations and boards that make it possible to be an architect.