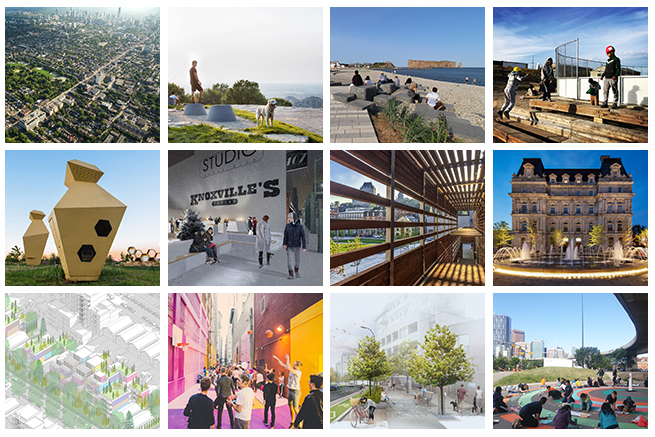 The winners include an urban design plan for Toronto that seeks to establish sufficient parks and open space to support a doubling of the downtown population. In Montreal, new way-finding aims to make the city’s mountain more accessible. Old Quebec City has replaced a parking lot with a waterfront park, while lanes in Vancouver have become places of social activity.

Other projects include a bee centre in Charlottetown, a proposal for outdoor spaces made of snow in Edmonton and fixing a “spaghetti junction” in the Toronto district of Etobicoke.

The National Urban Design Awards is a biennial Canadian awards program established by the Royal Architectural Institute of Canada, the Canadian Institute of Planners and the Canadian Society of Landscape Architects in 2006. The program showcases excellence in urban design, raises public awareness of the role of urban design in sustainability and quality of life in Canadian cities, and recognizes the contributions of individuals, organizations, firms, and projects.

The awards are part of a two-tier program held in cooperation with Canadian municipalities, in which the National Urban Design Awards jury evaluates winners of the 2017 municipal awards and entries submitted at large.

The awards will be presented on January 7, 2019, at the Ottawa Art Gallery in Ottawa, in conjunction with the Azrieli School of Architecture and Urbanism Forum Lecture Series. The event is open to the public.

The plan establishes a vision and framework for an expanded, improved, and connected parks, and public realm network within downtown Toronto to support a doubling of its population over the next 25 years.

“It is a highly useful template for the citizen, designer, and politician to understand the ways in which Toronto could achieve a public realm that is more accessible, cohesive, and of greater substance.”

Designed to commemorate Montreal’s 375th anniversary in 2017, the project aims to provide visitors to Mount Royal with a new experience of the mountain and a clearer understanding of its natural and historical features.

“The project demonstrates a high degree of appreciation for the rich architectural and landscape history of the Mount Royal Heritage Site.”

Rehabilitation of the waterfront and boardwalk at the Anse-du-Sud sector of Percé, QC
Completion: 2018
Lead Firm: AECOM
Client: City ofPercé

Devastated by climate change events, the waterfront and boardwalk received exceptional assistance from the Quebec government to fast-track a project for their protection and rehabilitation.

“The shoreline was made resilient to future storms through environmentally sustainable design measures.”

Residents of the Northern Village of Kuujjauq and designers from southern Quebec repurposed materials from the village dump to design and build an outdoor sports pavilion.

“The modest scope of the project raises the question of what could be achieved if this approach to revitalization of remote communities was properly funded and resourced.”
Category: Community Initiatives Award

In collaboration with the community, the architects created a destination to learn about the importance of bees in a sustainable environment.

“The innovative Urban Beehive Project shows how urban design can help address, educate, and inspire people to protect and conserve the environment.”

[tactical] Infrastructure
Edmonton, AB
Completion: 2017
Lead: Bryce Clayton (University of Waterloo)
This proposal is for the City of Edmonton to use snow and the involvement of citizen groups to create winter public spaces in the downtown core.

“This project is a provocative call to action for all winter cities to use the snow that would otherwise be removed to shape interactive, outdoor spaces.”

“You couldn’t pick a much more challenging site nor imagine a better design solution.”

The aim was to restore Place Vauquelin in Old Montreal’s administrative district and maximize its natural and historic features.

“Last updated over a half-century ago, the new Place Vauquelin solidifies its importance in Old Montreal’s landscape heritage.”

Domestic Insurgency - Towards Affordable Housing in Vancouver
Vancouver, BC
Completion: 2018
Lead: James Banks (University of Waterloo)
This thesis develops a housing framework for the private sector to build dwellings for a range of incomes.

“Domestic Insurgency offers a thorough reading of the issues that could lead to a more equitable and mixed-income housing ecosystem for Vancouver.”

“This compelling project shows us that with a sharing mindset single-use urban spaces can be vibrant social spaces.”

This 60s-era, "spaghetti junction" will be replaced by an at-grade pedestrian-friendly intersection, boulevards, trees, bike lanes, and space for patios.

“This project provides an excellent template for other cities and towns to repair their own spaghetti junctions.”

The project involved Grade 6 students and the local community in designing improvements to a dead-end street hidden under a flyover.