Some weeks, it all comes together | Royal Architectural Institute of Canada
Skip to main content

Some weeks, it all comes together 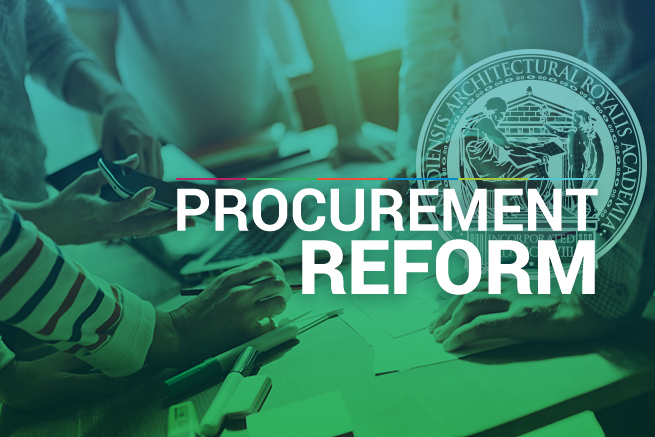 The Royal Architectural Institute of Canada (RAIC), the Association of Consulting Engineering Companies Canada (ACEC) and the Interiors Designers of Canada (IDC) are moving ahead on negotiations with the federal government to change the 90%-10% imbalance in assessing consultants’ RFP responses. Public Services and Procurement Canada (PSPC) has begun the consultation process for its long-awaited plans for the Qualifications-Based Selection pilot project. The Standing Committee on Government Operations and Estimates was treated to an impassioned presentation from ACEC’s President and CEO John Gamble in support of Qualifications-Based Selection. And we started the week on a high note, celebrating the commitment of Ottawa architect Deborah Farrow, FRAIC, as she stepped down from her long-standing volunteer commitment as the RAIC’s representative on several government-industry committees.

In 2015, the Canadian Construction Association (CCA) held 12 workshops across the country to discuss the quality of design documents, with a focus on federal government projects. In 2017 the CCA’s Quality of Documents Working Group, of which I was a member, issued a final report. Insufficient fees were cited as one cause of possibly inadequate drawings. Of concern was the current method employed in evaluating the fee component of a consultant’s proposal for federal projects. The method used values disproportionately to the lowest fee. Recognizing that the design and construction industry see this as a major problem, PSPC has initiated a task group comprised of federal representatives and members of the design consulting industry including Bruce Lorimer, FRAIC, RAIC’s Interim Executive Director. The objective is to improve the method of evaluation to support the best value to Canada, rather than the lowest fee. Their second meeting will take place the week of February 26.

When it comes to heavy-lifting, Ottawa architect Toon Dreessen, FRAIC, is no slouch. Years of relationship building resulted in the very successful Qualifications-Based Selection (QBS) workshop hosted by PSPC Assistant Deputy Minister Arianne Reza on September 18, 2017. With the help of industry representatives Cal Harrison of QBS Canada, John Gamble, ACEC-Canada, Mark Steiner of the American Council of Engineering Companies, Toon educated the audience of federal officials that best value in delivering successful projects is achieved through selecting architecture and engineering consultants based on their qualifications, not the lowest fee.

The advocacy for QBS is paying off. On February 6, PSPC issued a request for information to consult with the public on how best to approach Qualifications-Based Selection for federal projects.

The Standing Committee on Government Operations and Estimating

Selling the idea of QBS is not an easy task, especially to those whose focus and personal mission is to “protect the public purse.” On February 6, ACEC’s John Gamble presented the arguments for QBS to the Standing Committee and Government Operations and Estimating. His presentation was articulate and passionate. He closed with the true value of QBS to parliamentarians in saying “The lowest price isn’t the best price. The right price is the best price.” Well done John.

Celebrating Over a Decade of Volunteer Commitment

How did we start the week? On Friday, February 2, the RAIC celebrated. We honoured Deborah Farrow, FRAIC, for her decade-long volunteer work in representing the RAIC and the national architectural community on the Federal-Industry Real Property Advisory Council and the Brookfield Global Integrated Solutions industry working group. This work has not been easy and at times has proved frustrating. Debbie had persevered, and this week we have seen how advocacy and education work done by her and many others had come together. Congratulations Debbie.