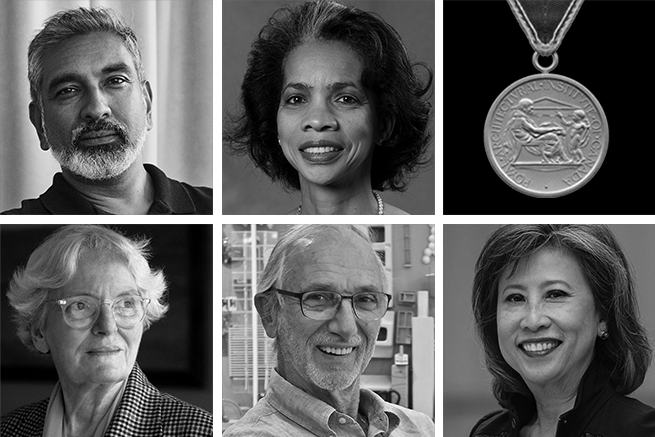 OTTAWA, March 26, 2019 – Five architects, including the designer of the iconic Georges Pompidou Centre in Paris, and one of the most influential American architects of the 20th century, have been named as Honorary Fellows of the Royal Architectural Institute of Canada (RAIC). The 2019 Honorary Fellows exemplify the role that architects play in public life around the world and the evolving diversity of the profession.

Renzo Piano, born to a working-class Italian family in 1937, became one of the best known 20th-century architects for buildings such as the Pompidou Centre, the London Bridge Tower (The Shard), and the Whitney Museum of American Art. He is now an Italian senator for life and head of a foundation dedicated to promoting the architectural profession.

Denise Scott Brown, Hon. FAIA, born in 1931, has been an outspoken advocate for women in architecture. Her influential book, Learning from Las Vegas: The Forgotten Symbolism of Architectural Form, challenged orthodox ideas about modern architecture. She also pioneered a systematic approach to urban planning that considers “form, forces and function.”

Ivenue Love-Stanley, FAIA is a pioneer who broke many barriers. She was the first African-American woman to graduate from the Georgia Institute of Technology College of Architecture in 1977, and the first African-American woman to become a registered architect in the Southeast.  She lectures widely and is a community leader and mentor to students and young architects.

Elizabeth Chu Richter, FAIA is the first Asian-American woman to be elected as President of the American Institute of Architects (2015). Richter champions the power of architecture and reached millions of listeners with the radio series The Shape of Texas, broadcast for 11 years on NPR-affiliate stations.

Vishaan Chakrabarti, FAIA is a practising architect, professor of design and urban theory at Columbia University, and the author of A Country of Cities: A Manifesto for an Urban America. He lectures and writes about rethinking global urban life in the 21st century.

“This year’s Honorary Fellows have been rightfully recognized as leaders and creative thinkers,” said Diarmuid Nash, FRAIC, Chancellor of the RAIC College of Fellows. “We are honoured to have iconic figures such as Denise Scott Brown and Renzo Piano become members of the RAIC, and at the same time to welcome leaders and role models such as Love-Stanley and Richter, and a provocative thinker like Chakrabarti who is challenging our ideas about cities and urban life.”

Honorary fellowship recognizes extraordinary achievement. Piano, Love-Stanley, Richter, and Chakrabarti will be inducted into the RAIC College of Fellows at a ceremony during the RAIC 2019 Festival of Architecture, taking place in Toronto from October 26 to 30. Piano will deliver the keynote address at the College of Fellows Convocation, and Chakrabarti will be a plenary speaker on the future of architecture. Scott Brown will be honoured at a later date.

“It is a great honor to be appointed as Honorary Fellow of the RAIC. It comes at the perfect time, since I have just been given the opportunity to work on the Toronto Courthouse, which will be my first project in Canada. I am particularly happy to work in this city, which is proud to be an open city, welcoming people that come from all around the world. It actually reminds me of construction sites, where people from all over the world work together: making public buildings is always a great gesture of peace.”

“Thank you, RAIC. I am happy indeed to receive your Honorary Fellowship, and to ponder on the thought of fellowship amongst us.  If I walk in a foreign country and see a doorbell marked 'Architect,' I know when I ring that I will receive a warm welcome. Just as, when I talked in Washington to the diversity committee of the AIA and told those young architects how Bob [Robert Venturi] and I realized that the marginality we felt lay at the very root of our creativity – the sigh of recognition that I heard from the audience I will never forget.”

"I am delighted and incredibly honored to receive the RAIC Honorary Fellowship. I look forward to strengthening professional and cultural ties between our countries.  Together with our Canadian colleagues, we can better amplify the voice of architecture in addressing global issues such as sustainability, resilience, affordable housing, health, dignity, and wellbeing."


“I am both humbled and elated….As a woman of color who hails from modest means, I am grateful to be in the company of other very accomplished architects. My personal philosophy emphasizes community-based design solutions that are interpretive and sustainable, while valuing the culture of those whom we serve. This recognition validates what I’ve been striving to accomplish as a citizen architect for over four decades.”

"It is an extraordinary privilege to be recognized as an Honorary Fellow by the RAIC, which I thank on behalf of our entire studio at PAU and all architects fighting for more equitable, sustainable and magnetic cities in the face of climate change and social discord. As the cities of Canada face welcome new waves of immigration and the concomitant challenges of urbanization, housing and infrastructure, it is a special honor to be counted among those fighting for a better and more beautiful urban world."

The Royal Architectural Institute of Canada is the leading voice for excellence in the built environment in Canada. Representing about 5,000 members, the RAIC advocates for excellence, works to demonstrate how design enhances the quality of life, and promotes responsible architecture in addressing important issues of society.