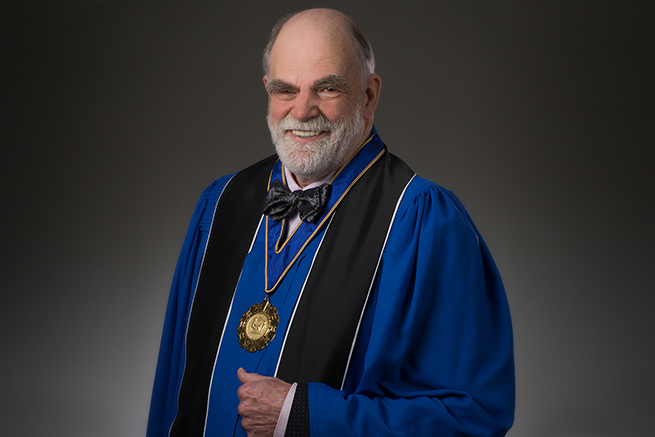 OTTAWA, February 13, 2018 — Michael J. Cox, FRAIC, an architect from Manitoba who has led numerous organizations and is passionate about the contribution architects can make in their communities, is the 79th President of the Royal Architectural Institute of Canada (RAIC).

Mr. Cox received the President’s Medal of office from the 2017 President Ewa Bieniecka, FRAIC, at a change-of-office ceremony on February 2 in Ottawa. About 40 guests attended, including past presidents and the RAIC Board of Directors, who were in the national capital region for a board meeting. The one-year term began January 1. Mr. Cox has been serving as President since September 2017 when Ms. Bieniecka shortened her term for personal reasons.

“The RAIC needs to focus on the immediate needs of its members at all stages of their careers and in all sizes of practice,” said Mr. Cox, who has been a sole practitioner for nearly 40 years. “This includes delivering relevant and accessible continuing-education programs, helping emerging practitioners, and advocating for architects on practice issues such as procurement reform.”

Mr. Cox, a past president of the Manitoba Association of Architects, said he will encourage significant membership growth among licensed architects as well as graduate architects, academics and emerging practitioners. “Greater numbers are essential for the RAIC to strengthen its advocacy on behalf of the profession and the built environment. I will be speaking with groups and individuals to come to a better understanding of ways in which the RAIC can be of increased assistance as part of a continuous effort to be valuable, relevant and forward-thinking.

“I will work to position the RAIC for growth, and to foster positive working relationships with provincial and territorial regulators as well as the Canadian academic institutions that teach architecture,” he added.

Born in Fort Frances, Ontario, Mr. Cox received his B.Arch. from the University of Manitoba in 1971. He has been the principal of Michael J. Cox, Architect, a one-person practice in Brandon Manitoba, since 1979. You can’t get much smaller than one,” he quips. The firm has completed hundreds of projects, ranging from small-scale residential renovations to significant commercial projects. The wholesale renovation of Brandon’s original electrical generating station resulted in an award-winning Western Regional Head Office facility for Manitoba Hydro. Recent work includes the design of a Royal Canadian Air Force WWII Memorial in Brandon. Mr. Cox also spent two years working in the Arctic.

A raconteur, a pilot, and a sailor, Mr. Cox is excited to employ his skills to add unanticipated value to building projects, no matter size or budget, and to help smaller communities realize their vision. He has also devoted significant energy to helping improve education, culture, development, and quality of life in his community.

“The skills we develop as leaders of the process by which architecture is made can also be of value to the communities in which we practice,” he says. “When you sit down with a client or a user group, your task is to take in a wide variety of hopes and dreams and expectations and to find a way to synthesize those into a common thread that becomes the building program and eventually built form.  By the same process, an effective board chair needs to listen to and encourage a wide variety of opinion and exchange of ideas, working to find the common thread that allows decisions to be made to bring action to ideas.”

Mr. Cox has served as chair of the Assiniboine Community College Board of Governors, president of the Brandon Kinsmen Club, vice chair of the Board of Directors of the Brandon Downtown Development Corporation and president and board chair of the Art Gallery of Southwestern Manitoba. He served a term on the board of the Winnipeg Symphony Orchestra and continues to chair the Manitoba Association of Architects’ public affairs committee.