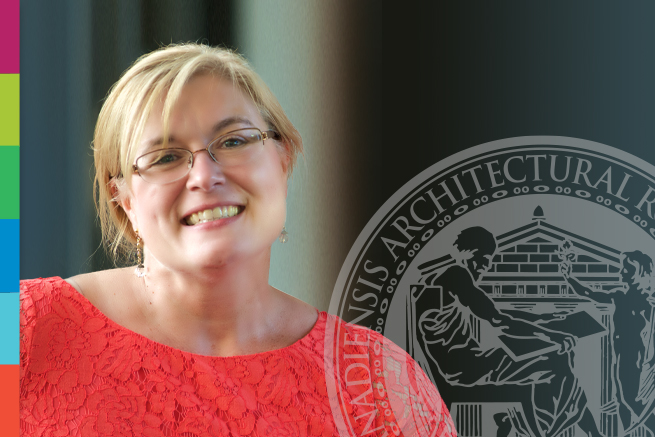 Looking back on her 15th Anniversary with the RAIC

After fifteen years with the Royal Architectural Institute of Canada, Chantal Charbonneau Hon. MRAIC still feels a certain amount of nervous energy and excited anticipation leading up the night of the College of Fellows Convocation, but that doesn’t stop it from being one of her favourite nights each year.

“The College of Fellows Convocation is the most stressful event to deliver, but the reward of seeing the pride and joy of our new and existing Fellows is insurmountable,” says Chantal. She adds that the cocktail reception following the actual ceremony is a nice bonus as well.

As of August 2020, Chantal has been with the RAIC for fifteen years, and our organization is delighted to celebrate this milestone anniversary with her. Throughout her career at the RAIC, Chantal has embodied our mission of promoting and supporting architectural excellence in Canada.

In 2005, the RAIC was searching for an Executive Assistant to support the Executive Director and RAIC Board of Directors. Due to an interest in the architectural profession, Chantal decided to apply for the position. “I originally applied for a position as Executive Assistant but was instead invited to assume the role of Manager Honours and Awards, as my predecessor was returning to school. I immediately accepted.” Previously, Chantal had worked in the private sector but became interested in working at a not-for-profit and the impact that she could have within that type of organization.

As someone new to the not-for-profit sector, Chantal felt like she had plenty to learn in her role—not to mention the staggering amount of study that can be done on the architectural profession and culture in Canada. “Not-for-profit was new to me,” Chantal said. “In 2007 it was suggested to me that I enroll in the Certified Association Executive program offered by the Canadian Society of Association Executives.” Since joining the RAIC, Chantal has also taken on the responsibility of managing and overseeing the RAIC’s Festival of Architecture, in addition to the Honours and Awards program and the RAIC Foundation Scholarships and Bursaries—which included an impressive 26 awards at the time and has only grown since then.

Chantal currently leads our internationally recognized Honours and Awards program, and as Director, she has been vital to the ongoing celebration and conversation on outstanding architecture in Canada and around the world.

With that, as they say, the rest is history.

While managing our organization’s celebrated Honours and Awards program is a feat for anyone, Chantal has also been instrumental to the success of the RAIC College of Fellows through her ongoing support and tireless effort.

Over the past fifteen years, Chantal has been involved in the ongoing growth and development of the RAIC. She believes that, though the staff has grown and changed during her time, the commitment to the RAIC’s mission has remained the same.

“It has grown and flourished to better serve our members—as we have increased our engagement, programs and have the capacity and resources to lead the conversation, Chantal said. “In 2005, we had seven full-time staff and one consultant. Now, we have 19 staff and a few consultants.”

As for the profession itself, Chantal noticed that despite the technological developments and shifts in Canadian society, the purpose of architecture and the ongoing conversations in the industry remain the same.

“Well, if you look to the past, we are still discussing and dealing with the same issues,” Chantal said. “I imagine there will be reoccurring themes in the future—however—I can see architecture being the catalyst for much-needed change with the challenges that we are now facing.”

There is an opportunity for architects to be leaders, according to Chantal, and for practitioners to guide Canada towards a stronger built environment.

After fifteen years with the RAIC, there have been plenty of unforgettable moments, but for Chantal, the connections and friends made in the profession stood out among everything else.

“The friendships I have made over the years at events like Festival and Convocation stick out to me,” Chantal said. “It is times like those where we can build lasting relationships with our members!”