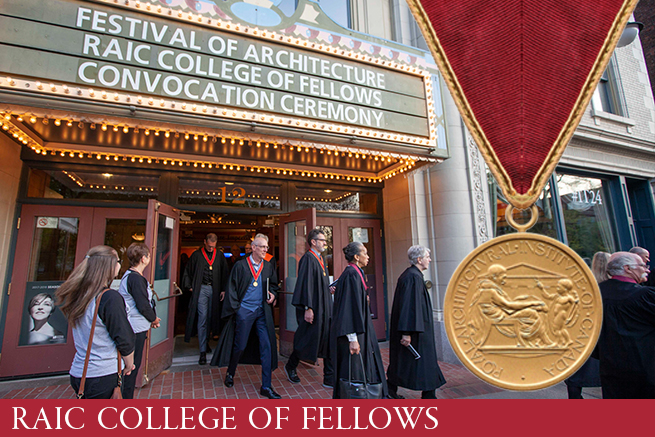 OTTAWA, June 25, 2019 – A Toronto architect with a portfolio of subway stations; a Montreal hospital expert; a Vancouver leader in sustainable design, and a Winnipeg scholar working toward a national architecture policy are among the Canadian architects to be named 2019 Fellows.

The College of Fellows of the Royal Architectural Institute of Canada (RAIC) bestows Fellowship to RAIC members in recognition of outstanding achievement. Criteria include design excellence, exceptional scholarly contribution, or distinguished service to the profession or the community.

Fellows will be inducted at the College of Fellows Convocation ceremony on October 29 at the Royal Conservatory of Music in Toronto during the annual RAIC Festival of Architecture which takes place October 26 to 30.

See the full list below. Photos and citations are available by request.

The College of Fellows will also induct five Honorary Fellows.

Renzo Piano is one of the best known 20th-century architects for buildings such as the Pompidou Centre, the London Bridge Tower (The Shard), and the Whitney Museum of American Art.

Denise Scott Brown is an outspoken advocate for women in architecture. Her influential book Learning from Las Vegas: The Forgotten Symbolism of Architectural Form, challenged orthodox ideas about modern architecture.

Ivenue Love-Stanley is an architect and pioneer who broke many barriers, including becoming the first African-American woman to graduate from the Georgia Institute of Technology College of Architecture in 1977.

Elizabeth Chu Richter is a Past President of the American Institute of Architects who reached millions of listeners with the radio series, The Shape of Texas, broadcast for 11 years on NPR-affiliate stations.

Vishaan Chakrabarti is a practicing architect, professor of design and urban theory at Columbia University, and the author of A Country of Cities: A Manifesto for an Urban America.