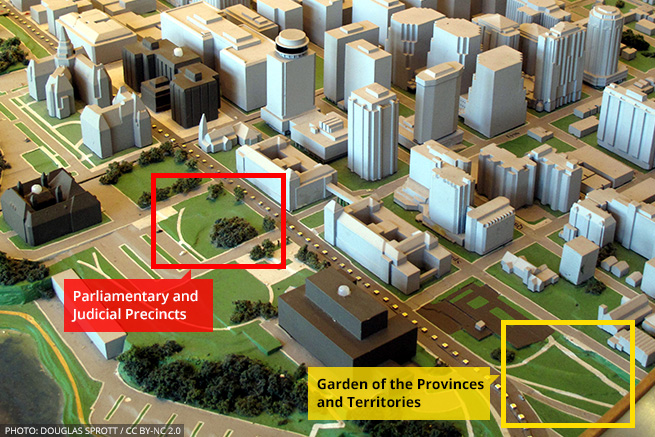 OTTAWA, December 17, 2015 – The Royal Architectural Institute of Canada (RAIC) is relieved at today’s announcement by Canadian Heritage Minister Mélanie Joly that the National Memorial to the Victims of Communism will not be located next to the Supreme Court of Canada in Ottawa.

“It is good news that the Government of Canada has chosen to respect the Long Term Vision and Plan (LTVP) for the Parliamentary and Judicial Precincts,” said RAIC President-elect Allan Teramura, FRAIC.

He noted that the plan had been developed over the past 100 years by some of Canada’s finest architects, urban designers, and landscape architects.

In the plan, the Wellington Street site is intended for a new building for the federal court. This building would complete a “Judicial Triad,” consisting of the Supreme Court of Canada to the north, flanked by the Justice Building to the east, and a federal court on the parcel to the west. It is meant to complement the “Parliamentary Triad” of the Centre, East, and West Blocks; together they create a cultural landscape that represents Canada’s core democratic institutions.

Minister Joly also announced that the Government of Canada will seek National Capital Commission (NCC) board approval for the Garden of the Provinces and Territories site as the location for a new memorial. She confirmed the government’s intent to launch, early in 2016, a consultation process for a review of the design considerations.

The RAIC welcomes these actions. “The RAIC respectfully suggests that the NCC and the Canadian Heritage department work together to arrive at a better solution,” says Mr. Teramura. “Moving the current design to the Garden of the Provinces would not be appropriate. If the memorial is placed on that important site, it needs to be compatible in scale and character. When the NCC offered that site, they likely expected a commemoration of a much more modest scale.”

The RAIC was a member of a coalition of civil society organizations and individuals that campaigned for almost a year to persuade the former government to relocate the memorial. Through this campaign, the coalition became aware of the vulnerability of the Parliamentary and Judicial Precincts to arbitrary development inconsistent with the broader, approved plans for the Parliamentary and Judicial Precincts.

The LTVP was approved by all stakeholders and political parties after extensive consultation. Despite this approval, Canada’s previous government attempted to alter the Judicial Precinct in an intrusive and destructive way, without reference to the LTVP and due process.

“We remain very concerned that an executive order was able to override the LTVP,” says Mr. Teramura.

There are gaps in the legislation protecting Canada’s National Capital Region. Notably, under the current National Capital Act, there is no special designation or protection provided for the Parliamentary and Judicial Precincts.

The RAIC recommends that the Act be reviewed and amended to provide special designation and protection. Consideration should also be given to making both precincts National Historic Sites.