Eberhard Zeidler, FRAIC, recipient of the RAIC Gold Medal in 1986, proposed that Ontario Place be inserted in and over Lake Ontario. His design consisted of the Pods, five interconnected mast-hung pavilions; and the Cinesphere, a “triodetic” dome that housed the world’s first permanent IMAX cinema.

Over the years, the site was altered (though not the Cinesphere and Pods), which obscured the original design somewhat. In 2013, however, the Ontario Ministry of Culture, Tourism, and Sport conducted a heritage study that concluded: “Ontario Place is a cultural heritage landscape of provincial significance.” Accordingly, Ontario Place is now subject to the Ontario Heritage Act, and its future managed in part by a conservation plan respective of the Act’s standards and guidelines.

The striking Cinesphere – also known as “the Bubble” – is a 35-metre-wide dome made from steel and aluminum tubes. The structure is similar in design to the famous geodesic dome, designed by Carl Zeiss and developed by R. Buckminster Fuller.

The Pods’ first function was to host an elaborate multimedia exhibition, though their simplicity makes their program flexible. Despite the unique aesthetic of the bridge-like suspension structure that elevates the Pods over the lake, at the most basic level, each Pod is a 743-square-metre, three-storey box.

"While at present, the Cinesphere and Pods no longer house the functions they were originally designed for, they still exhibit all the strong design presence they did when they were first completed."

"The Ontario Place Cinesphere and Pods are a dramatic creation emulating for Toronto and Ontario, the great architectural and social success of Expo ‘67 in Montreal."

"The Cinesphere and Pods realize in tangible physical form some of the most ambitious Utopian architectural ideas from Europe and the United States of the 1960’s, such as the sky cities imagined by designers such as Yona Friedman, and technological fantasies conceived by the Archigram group in Britain."

"They are a compelling example of two major design tendencies of their period, the “megastructure” and “high-tech” design." 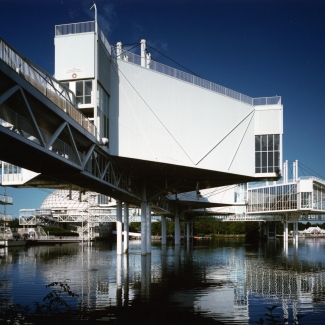 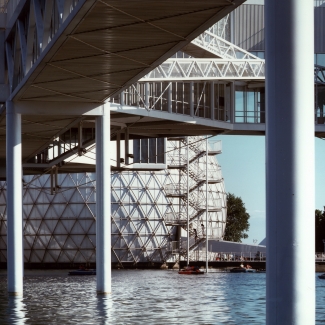 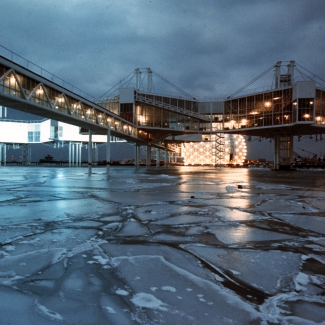 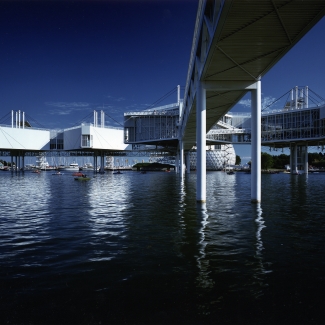 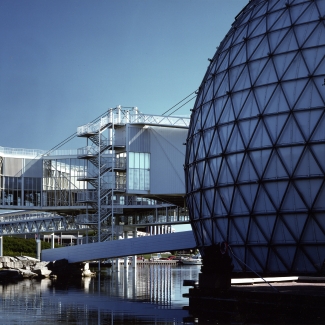 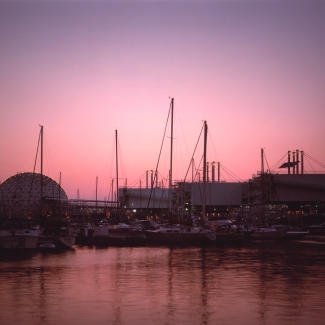